Congratulations to our Spring 2022 graduates

Congratulations to our students who are graduating with a BS in Physics. L to r: Nicholas Theodorou, Cole Rischbieter, Sean Anderson, Zachary Miller, Andrew Niiro, Andrew Janes, and Jose Padron (not pictured). We wish you all the best for your future paths!

Congratulations to Dr. Shun Saito, assistant professor of physics, who has been awarded a 2022 CASB Research Award for his exceptional work with undergraduate students. 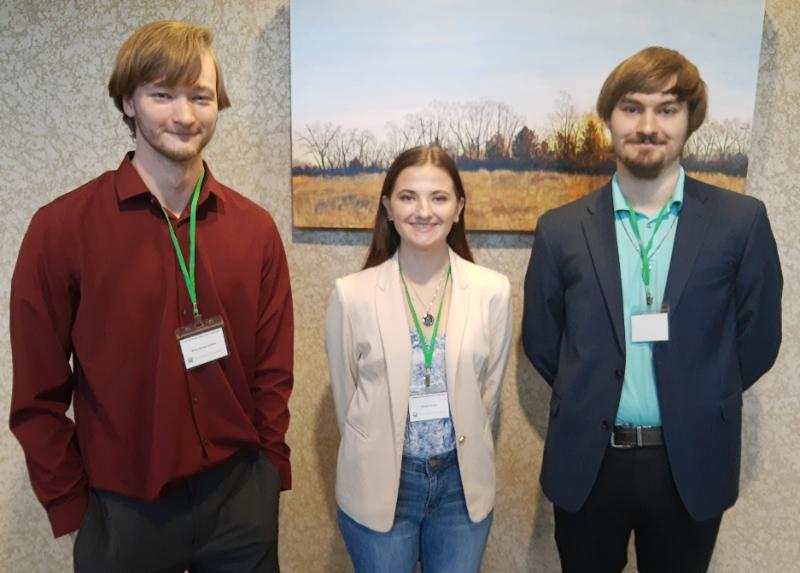 We are excited to welcome our new assistant professors Dr. Halyna Hodovanets and Dr. Hyunsoo Kim who are joining our department from Texas Tech. Both are condensed matter experimentalists and received their PhD's from Iowa State.

Congratulations to our fall 2021 graduates

Congratulations to our students who are graduating with a BS in Physics: Brock Hinton, Ethan Hisle, Joshua Dalton (l to r) and Noah Baden (not pictured). We wish you all the best for the future.

Sujan Bastola, Xuecheng Ye, and Jack Crewse (left to right) are the winners of the 28th annual Schearer Prize competition for graduate research. It is held in memory of Laird D. Schearer, the department’s first Curators' Professor of Physics, and rewards graduate students for outstanding research performed during the course of their graduate study. 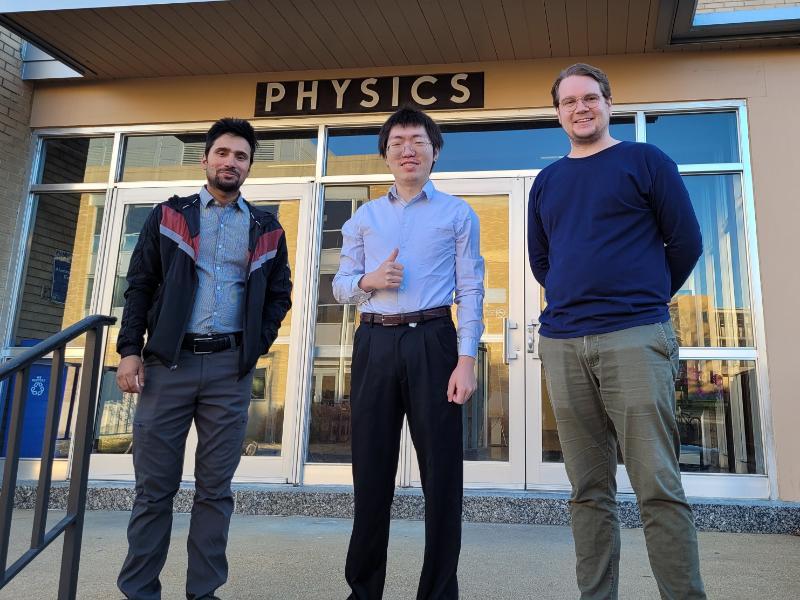 Curators' professor Michael Schulz is retiring after 31 years in our department. Congratulations and best wishes. 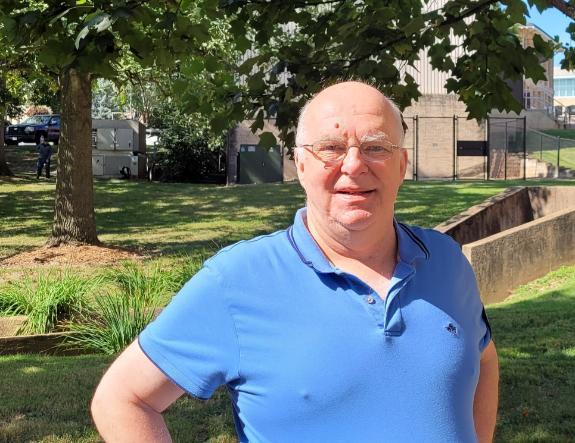 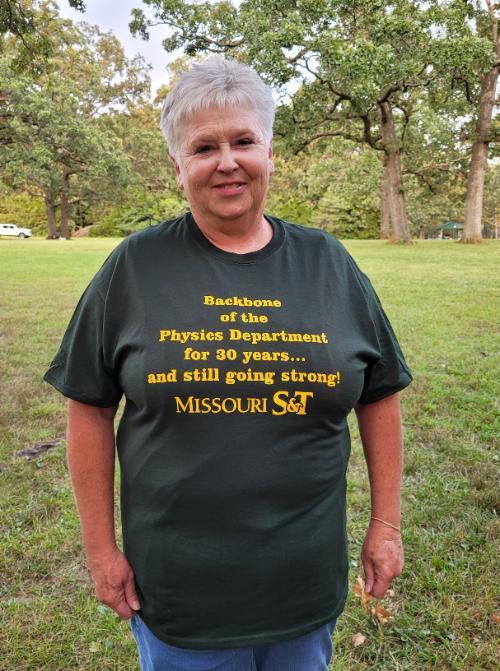 Congratulations to our Spring 2021 Graduates

Congratulations to our students who are graduating with a BS in Physics!
Top l to r: James Bearden, Joseph Franz, Samuel Halladay; bottom l to r: Jodie Hermann, Elijah Stafford, Seth Stubblefield, Joshua Maechler; not pictured: Taylor Lindenbusch, Nicholas Razo. We wish you all the best for your future paths.

Congratulations to the winners of the Fuller Prize Competition for Undergraduate Research. First prize was awarded to Samuel Halladay (Advisor: Dr. Thomas Vojta) for his work on Fractional Brownian Motion in Confined Geometries and to Steven Karst (Advisor: Dr. Shun Saito) for his project Machine Learning Optimizes a Survey of Dark Energy. The third prize was awarded to Charles Kropp (Advisor: Dr. Alexey Yamilov) for his research Aharonov-Bohm Conductance Oscillations in terms of Transmission Eigenchannels. The Fuller Prize Competition for Undergraduate Research honors the memory of Dr. Harold Q. Fuller, former chair of the physics department. 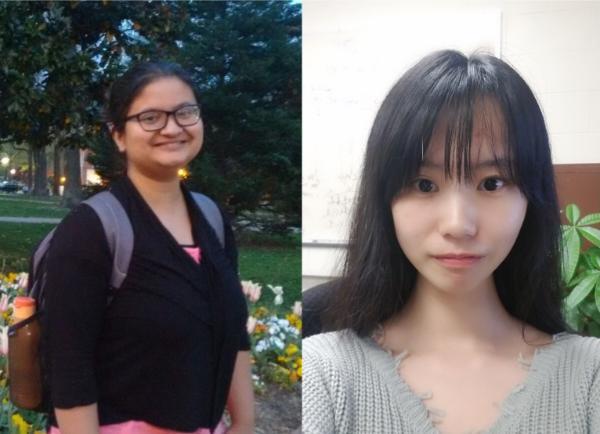 Congratulations to our fall 2020 graduates

Congratulations to our fall 2020 graduates: Kenneth Distefano, Nathaniel Page, Elizabeth Triller, Ravi Shastri, and Alex Warhover. We are proud of you and wish you all the best.

Jack Crewse (left), Bishnu Acharya (center), and  Gaurav Khairnar(right), Ph.D. students in physics, are winners of this year’s Schearer Prize, the Missouri S&T Physics Department’s annual graduate research competition. It is held in memory of Laird D. Schearer, the department’s first Curators' Professor of Physics, and rewards graduate students for outstanding research performed during the course of their graduate study.

Jack Crewse won first prize for his research on high-harmonic generation in Dirac metals and the application of the semiconductor-Bloch formalism to topological systems. Bishnu Acharya was awarded second prize for a complete experiment on multi-photon ionization of ultra-cold and polarized atoms. Gaurav Khairnar received third prize for his studies of the phase boundary near a magnetic percolation transition.

An international research team has created cosmological simulations that accurately depict the role of neutrinos in the evolution of the universe in a study recently published in The Astrophysical Journal. Missouri University of Science and Technology cosmologist Dr. Shun Saito,  assistant professor of physics and researcher on the team, says the work is a milestone in the process of simulating the formation of the structure of the universe. 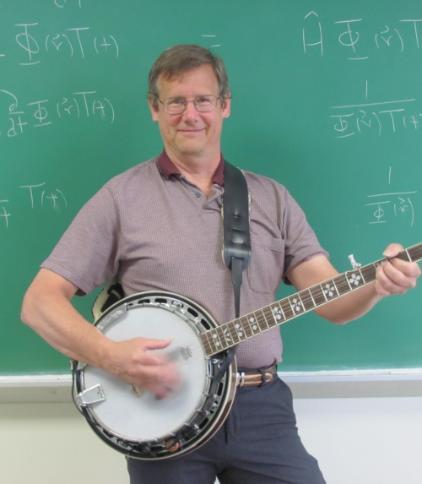 On September 2, 2020, astronomers announced the detection of a signal from the most massive black hole merger yet observed in gravitational waves. The signal was observed on May 21, 2019 with the National Science Foundation’s Laser Interferometer Gravitational-wave Observatory (LIGO), a pair of identical, 4-kilometer-long interferometers in the United States, and Virgo, a 3-kilometer-long detector in Italy. The international team of scientists, who make up the LIGO Scientific Collaboration (LSC) and the Virgo Collaboration, have reported their findings in two papers published today. One, appearing in Physical Review Letters, details the discovery, and the other, in The Astrophysical Journal Letters, discusses the signal’s physical properties and astrophysical implications. Missouri S&T is part of the LIGO Scientific Collaboration through the Institute of Multi-messenger Astrophysics and Cosmology (IMAC) at the Physics Department. Three IMAC researchers and students are among the authors of the two papers.

The two merging black holes had a mass of about 85 and 66 times the mass of the sun and merged into an “intermediate-mass” black hole, with a mass of about 150 times that of the sun. The merger likely produced gravitational waves equal to the energy of eight suns. The two black holes were located roughly 15 billion light years away from Earth, making this event one of the most distant gravitational-wave sources detected so far.

Congratulations to our Spring 2020 Graduates

The 2020 Fuller Prize competition for undergraduate research took place via Zoom this year. First Prize has been awarded to Alex Warhover for  his research on Anomalous Diffusion with an Absorbing Wall (Advisor: Dr. Vojta). Second Prizes went to Elizabeth Caputa-Hatley for her project Highly non-stoichiometric amorphous oxide semiconductors:  the structure and electronic properties of defects in a-In2O3-x (Advisor: Dr. Medvedeva) and to Kyle McMillen for his work on Characterization of Supersonic Gas-jet Targets for Laser Wakefield  Accelerators (LWFA)  (Advisor: Dr. Daoru Han). Congratulations to all the competitors and to their advisors for an exceptional set of research presentations.

Congratulations to Dr. Michael Schulz, Curators' Distinguished Professor of Physics, for receiving a Distinguished Scientist award from the Chinese Academy of Sciences. Each year, only three recipients from all areas of physics and mathematics are selected to receive this award. Dr. Schulz will travel across China to give a lecture series at several institutes of the academy next summer.‌ 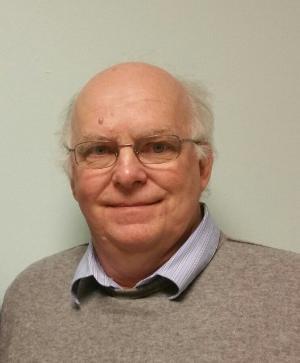 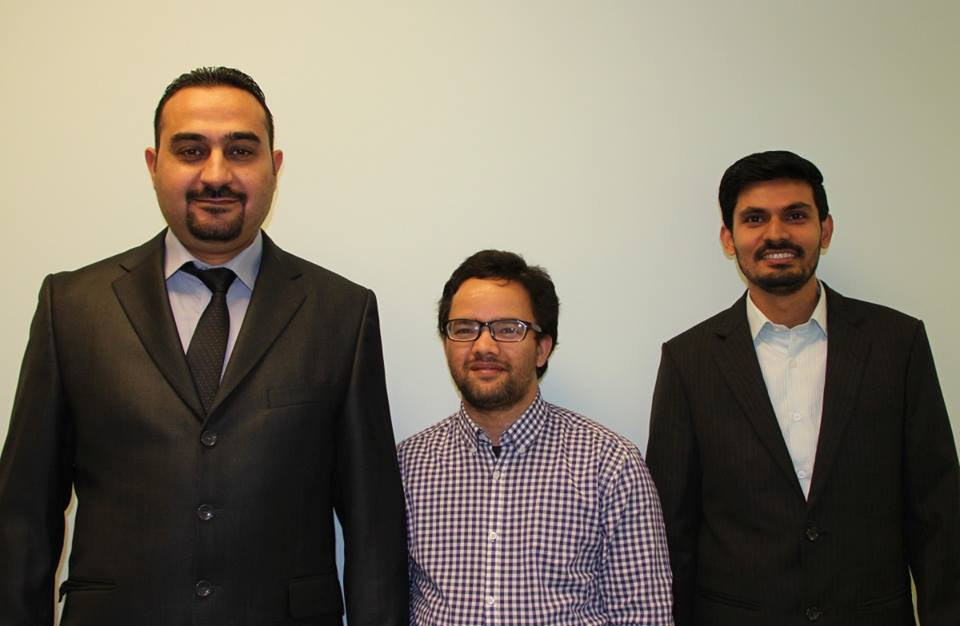 Missouri S&T has joined the Hobby-Eberly Telescope Dark Energy Experiment (HETDEX) as one of 11 international institutions that are collaborating to define the force causing the accelerated expansion of the universe.  “The cosmic acceleration is one of the biggest mysteries in our fundamental physics,” says Dr. Shun Saito, cosmologist, assistant professor of physics and leader of Missouri S&T’s HETDEX research group. 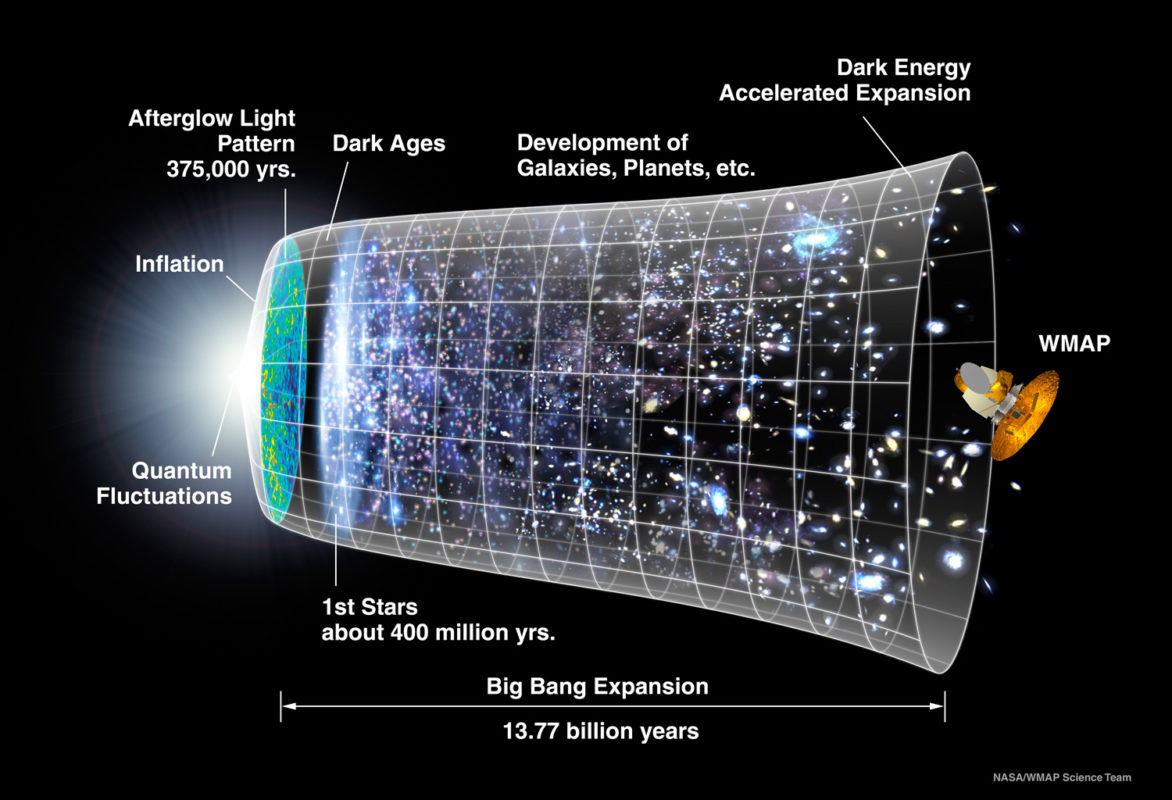 A team of Missouri S&T faculty has won a $1.96 million award from the National Science Foundation's Office of Advanced Cyberinfrastructure. The award will be used to set up a supercomputer that will enable advanced computational science and engineering research and education at Missouri S&T and several partner institutions throughout the state. The team consists of Richard Dawes, Chemistry, who lead the initiative; Julia Medvedeva and Thomas Vojta from Physics; Stephen Gao from Geosciences and Geological & Petroleum Engineering; and Serhat Hosder, Mechanical & Aerospace Engineering. Thomas Vojta will serve as Principal Investigator for the award while Richard Dawes is on leave from S&T.

Prof. Jerry Peacher celebrated 50 years of teaching at our department. 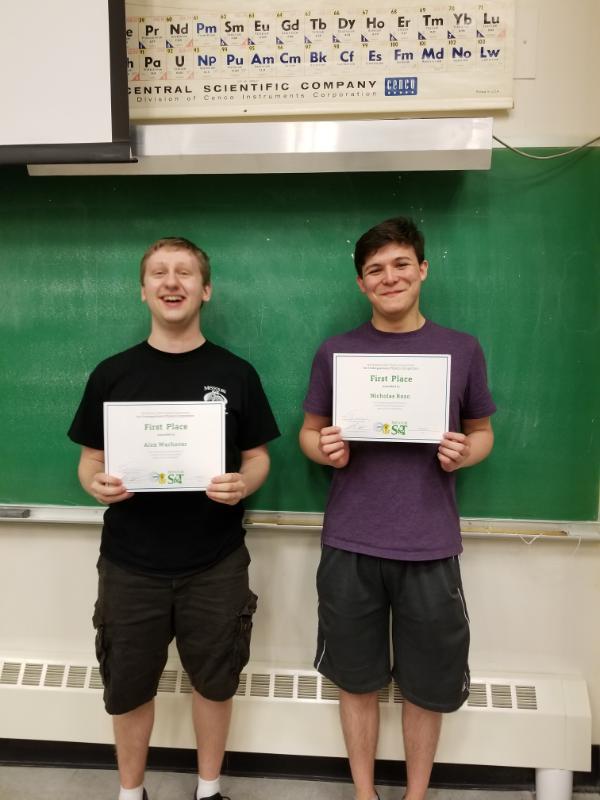 Congratulations to Alex Warhover and Nicholas Razo who shared the first prize in the Missouri S&T physics competition. The competition is focused on junior undergraduate students, with only the material covered in the introductory physics courses necessary for the solution of the problems.  Theoretical and experimental portions of the competition contained 3 problems total with the limited time to solve them and generate a report. 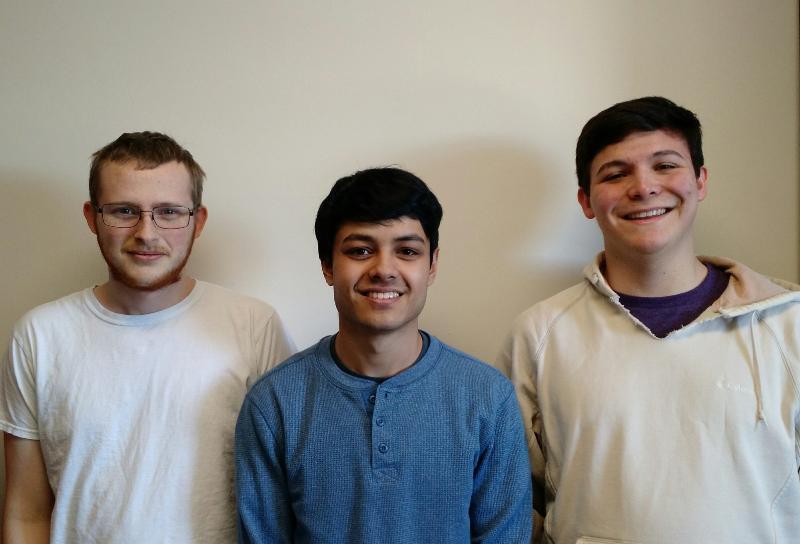 Nicholas Razo, Nicholas Parris, and Anzumaan Chakraborty, undergraduate students in physics, are members of a team that won a Silver medal in the University Physics Competition. The competition is a worldwide event with over 280 teams participating in the course of one grueling weekend in November of 2018, when each team had to research, solve and deliver a report on the open-ended physics problem. For their work on the "Sending a Light Sail Propelled Nanocraft to Alpha Centauri" problem, the Missouri S&T team received a Silver Medal, a distinction for the top 18%  of the field.

Jack Crewse and Yunsheng Qiu, Ph.D. students in physics, are winners of this year’s Schearer Prize, the Missouri S&T Physics Department’s annual graduate research competition. It is held in memory of Laird D. Schearer, the department’s first Curators' Professor of Physics, and rewards graduate students for outstanding research performed during the course of their graduate study. 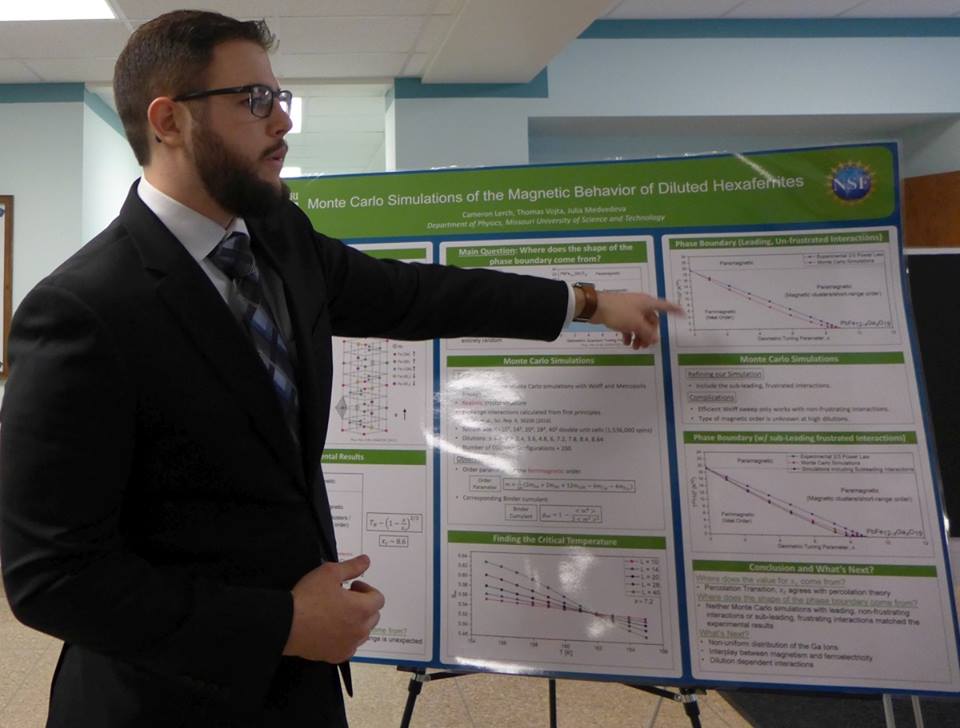 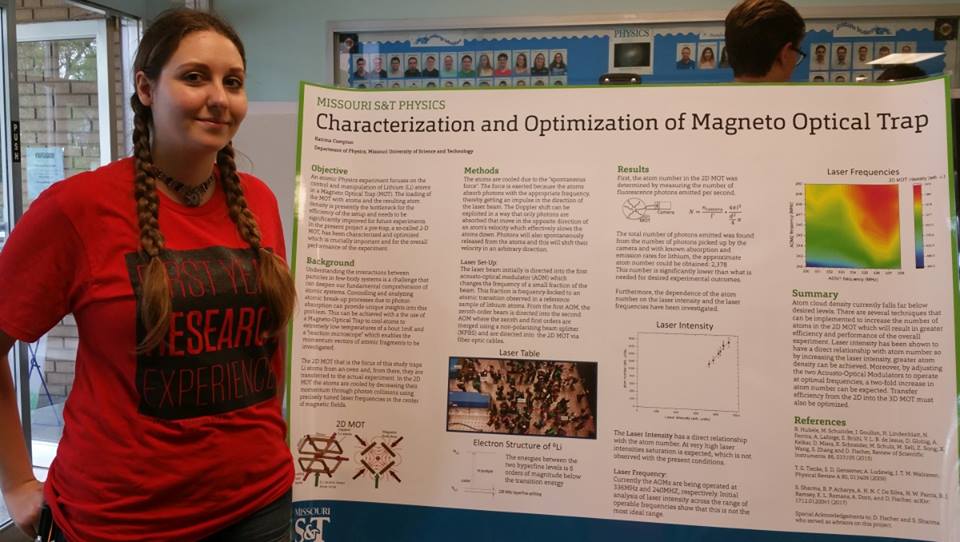 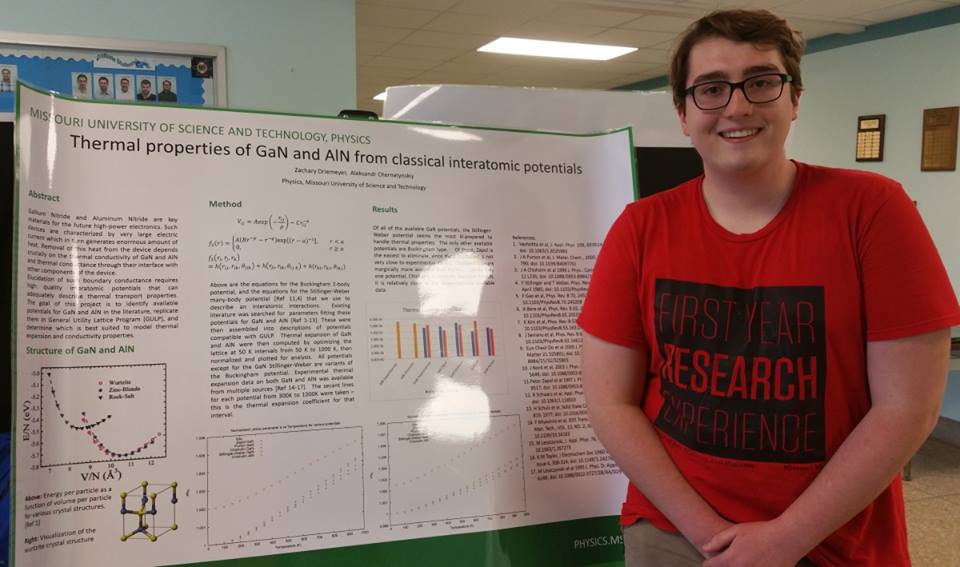 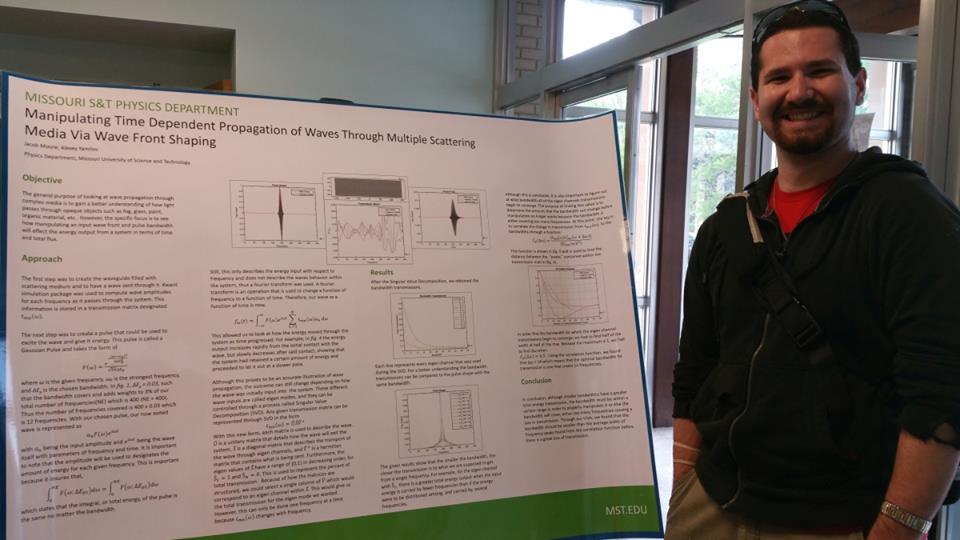 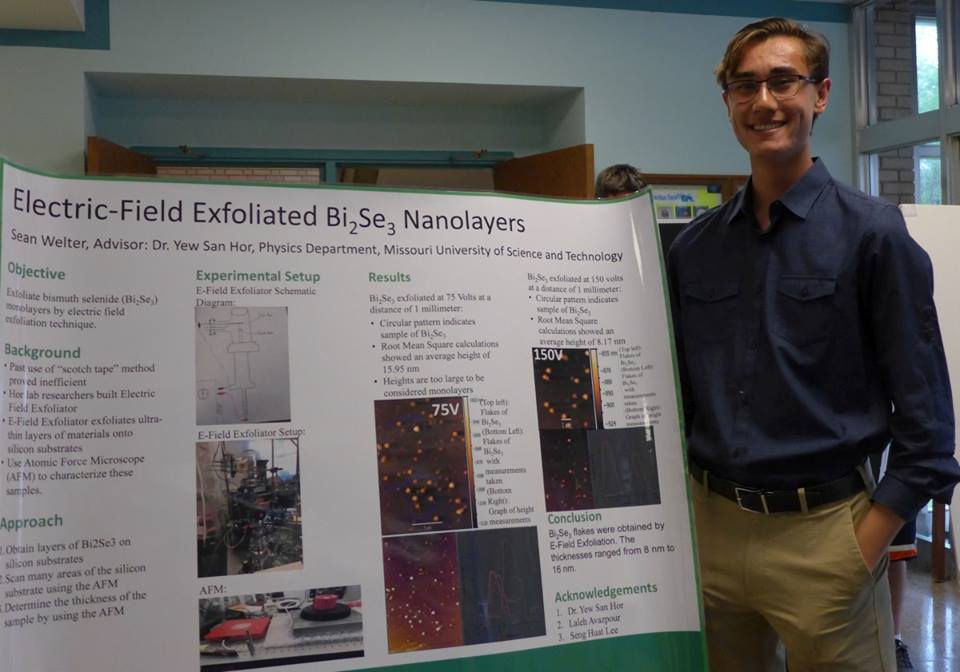 Society of Physics Students in Argonne 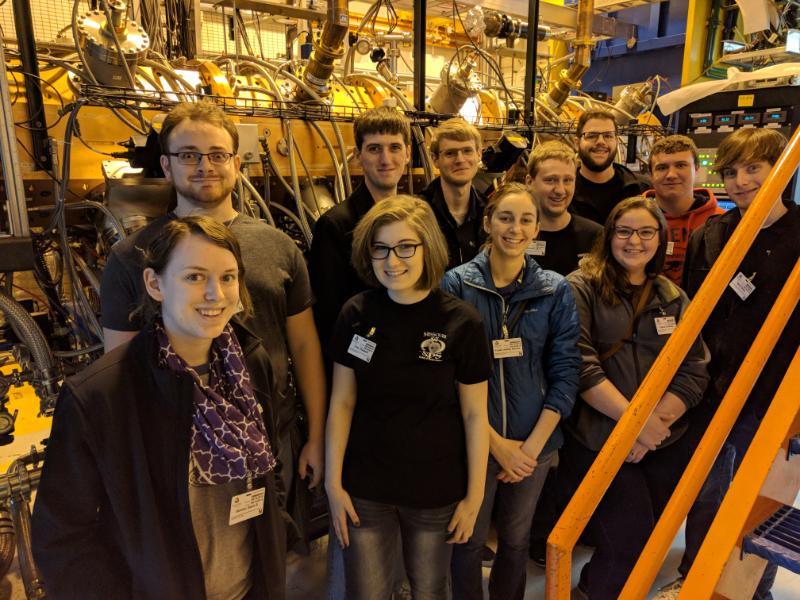 From SPS to Sigma Pi Sigma

We celebrated on Apr 4th the induction of 17 of our best undergraduate students into Sigma Pi Sigma, the honor society of the Society of Physics Students. Congratulations! 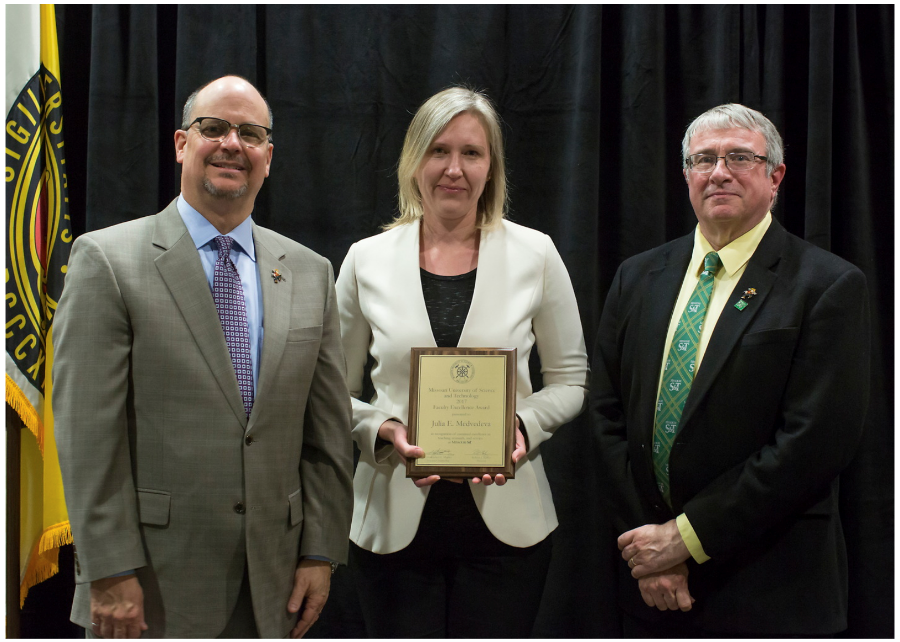 Dr. Julia Medvedeva, professor of physics, was among 4 faculty members at Missouri S&T who were honored with the Faculty Excellence Award on Feb. 13th.   The award recognizes faculty members who have demonstrated sustained excellence teaching, research, and service  and carries a monetary stipend funded by industry and alumni contributions. Congratulations!